Original Series Follows the Lifelong Hustle of Young Female Hip Hop and Drill Stars, Amplified Through the Sounds of Chicago’s South Side 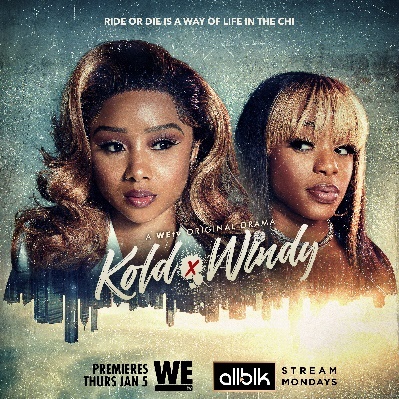 WE tv released the supertease trailer for its all-new, eight-episode scripted drama series, Kold x Windy, from creators Kenny Young (One Week), Phil James (Bachelors), and Vernon “Xtreme” Brown (Raven Music). Exposing the reality behind Chicago’s south side and its street culture that has influenced our entire nation, the original series, premieres on Thursday, January 5, 2023 at 10 PM ET/9 PM CT on WE tv. New episodes become available on popular AMC streaming service ALLBLK, every Monday, following their premiere on WE tv.

Fueled by the authentic sounds and raw energy surrounding the drill music movement, Kold x Windy follows rising hip hop and drill star Malika “Kold” Wise (Sh’Kia Augustin, Black Lightning); who is desperate to create a better life for her and her son in Chicago’s south side. Her trusted confidant and group member Renee “Windy” Johnson (Nijah Brenea, Rap Sh!t), is a rapper with a strong dedication to the city streets. As Malika’s career begins to ignite, the challenges she faces start to stack up. Her lifelong hustle — credit card fraud — catches up with her, and rival drill artists start to view her as a threat. When new love arises, the pressures of making music, her hustle and her troubled son may stand in the way…alongside Renee who does not support Malika’s desire to change her image and will stop at nothing to prevent it. Will Malika be able to break free of her life of street crime to achieve her music dreams and save her family?

With compelling, can’t miss unscripted shows, WE tv’s programming is fueled by personalities and relationships filled with purpose and passion. WE tv welcomes everyone and creates an inclusive experience across all platforms: on TV, online, on demand, and social media, embracing how today’s digitally savvy, socially engaged audiences connect through content, using it as a catalyst to drive conversation and build community. Further building on this mission, current WE tv originals are now available to stream on WE tv’s sister platform, ALLBLK. WE tv is owned and operated by AMC Networks Inc., and its sister networks include AMC, BBC America, IFC, SundanceTV and streamers Acorn TV, ALLBLK, AMC+, Shudder and Sundance Now.

Chalice Entertainment is an entertainment company born of the creative partnership of film producer Phil James, Co-Founder and CEO of James Young Entertainment, a Los Angeles Based production company, music producer Vernon “Xtreme” Brown, known professionally as Xtreme. Creating music from opposite ends of the spectrum ranging from R&B to Hip Hop and award-winning storyteller, writer, actor, and director for film, television, and stage Kenny Young who combined their talents and experiences. Chalice Entertainment is dedicated to telling stories that entertain, educate, and inspire.