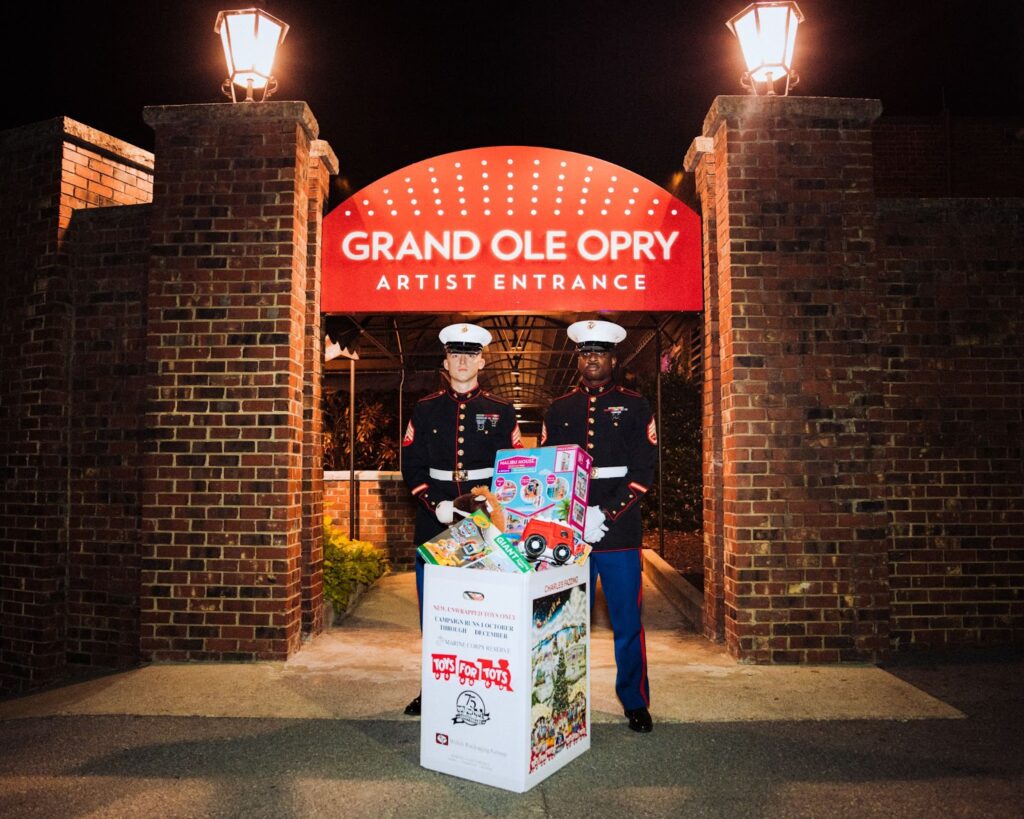 Award-winning Circle Network announced that it will be partnering with Toys For Tots to give back this holiday season through a month-long partnership beginning on Monday, November 21, which will carry on through to December 25. During this time the network will air three special Opry Live episodes where country stars including Lauren Alaina, Dustin Lynch and Darius Rucker team up to encourage country music fans to donate to Toys For Tots, bringing joy to children nationwide this winter. Throughout these three episodes a QR code will be available for viewers to scan and donate live, but even if a show is missed, the opportunity to donate will remain open throughout the holiday season by visiting the Opry’s Toys For Tots donation page.

“The holiday season is all about giving back and spreading joy,” said Circle Network’s General Manager, Drew Reifenberger. “Teaming up with some of country music’s biggest stars to help drive home the Toys For Tots mission is the perfect partnership for us at Circle. To our audience — please enjoy the Opry Live performances and donate what you can to this great cause!”

Circle Network will air the three special Opry Live episodes on November 26, December 3 and December 10 each at 9/8c PM. Each episode will honor Toys for Tots by featuring heartfelt, one-of-a-kind moments with the artists as they prepare their donation gifts, which will all take place alongside live performances from country legends Carrie Underwood, Luke Combs, Craig Morgan, Ashley McBryde, and more. McBryde will also be inducted into the Grand Ole Opry during her episode. See below for the full lineup of shows:

The Opry’s donation page for Toys For Tots can be found here: https://toysfortots.org/opry/

Circle Network is the official television broadcast home of the Grand Ole Opry and airs Opry Live each Saturday night. The Opry Live special programming can also be viewed on Circle All Access Facebook and YouTube, as well as on opry.com, wsmonline.com, SiriusXM’s Willie’s Roadhouse channel and the show’s flagship radio home, WSM Radio.

Circle Network is a television network dedicated to celebrating country music and lifestyle by putting fans inside the circle of everything country. Circle offers entertainment news, documentaries, movies, new and licensed programming, and music performances, including live performances from the Grand Ole Opry, and more. Circle is available to millions of viewers. Besides being available free over the air in Gray Television markets, Circle is also available on DISH, Sling TV, Frndly TV, FuboTV, and many cable distributor lineups throughout the country. Circle also offers free ad-supported streaming distribution via Tubi, Samsung TV Plus, Peacock, The Roku Channel, STIRR, Redbox, DistroTV, XUMO, and VIZIO SmartCast®. Named Digiday’s 2021 Best Streaming TV Platform and Pollstar’s #1 Livestreamer across all genres for 2020, Circle is a joint venture between Opry Entertainment Group, a subsidiary of Ryman Hospitality Properties, and Gray Television.

About the Grand Ole Opry

Opry presents the best in country music live every week from Nashville, Tenn. The Opry can be heard at opry.com and wsmonline.com, SiriusXM Willie’s Roadhouse, and its flagship home, 650 AM-WSM, with Saturday night shows seen on the Circle Network. The Grand Ole Opry is owned by Ryman Hospitality Properties (NYSE: RHP). For more information, visit opry.com.

About Marine Toys for Tots

Toys for Tots, a 75-year national charitable Program run by the U.S. Marine Corps Reserve, provides year-round joy, comfort, and hope to less fortunate children across the Nation through the gift of a new toy or book. The gifts that are collected by Marines and volunteers during the holiday season, and those that are distributed beyond Christmastime, offer disadvantaged children recognition, confidence, and a positive memory for a lifetime. It is such experiences that help children become responsible citizens and caring members of their community. For over seven decades, the program has evolved and grown exponentially having delivered hope and the magic of Christmas to over 281 million less fortunate children. Now, in our 75th year, the Marine Corps Reserve Toys for Tots Program also provides support year-round to families experiencing challenges and exceptional circumstances, thus fulfilling the hopes and dream of millions of less fortunate children Nationwide. The Marine Toys for Tots Foundation is a not-for-profit organization authorized by the U.S. Marine Corps and the Department of Defense to provide fundraising and other necessary support for the annual Marine Corps Reserve Toys for Tots Program. For more information, visit www.toysfortots.org.