BRIC, is the leading arts and media institution anchored in Downtown Brooklyn and its EMMY winning network, BRIC TV is proud to announce its first late-night talk show series, Hella Late! with Hollie Harper, premiering on June 8th at 10 pm! While Hollie Harper is the star, host, writer as well as Co-Executive Producer of Hella Late!, she is also an amazing stand-up comedian, mom blogger for Medium, and a co-host of the nationally trending Twitter Chat Blerd Dating. However, Hollie’s longest-running accolade is her sketch comedy troupe AMERICAN CANDY which she has been Creative Director of for the last 12 years. In a world where only a handful of Black women are hosting late-night talk/variety shows, Hollie is one of the few that is bringing a fresh ‘grown folk’ approach to late-night comedy. Lastly, from the showrunner to the EP’s, the production team behind Hella Late! with Hollie Harper are all black creatives whose experience spans 30+ years! More information is below and if you would like to interview Hollie or members of the cast/team, please email the contact above, Kuye Youngblood! 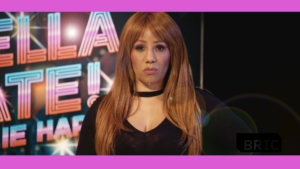 Hollie is a multi-talented writer/comedian from Cape May, New Jersey with a Bachelor in Fine Arts for acting from The Theatre School at DePaul University, formerly the Goodman School of Drama. Her plays and films have been in the Samuel French One Act Play Festival, the Denver Pan African Film Festival, and Urbanworld, and she starred Off-Broadway in The White Blacks by Melanie Goodreaux. Her sketch group AMERICAN CANDY was listed as Time Out Chicago’s Top 5 sketch groups to watch and during their 12 years of sold-out shows, their latest, The Edge of Zoom, done during the pandemic, has garnered 32K views. She also teaches sketch for Gold Comedy and Standup Girls where she is a Board Member. Hollie is an in-house host for the West Side Comedy Club, she serves as the creative director of the 2021 Black Women in Comedy Laff Fest and she is also a co-host of the nationally trending Twitter Chat Blerd Dating.

Okema T. Moore is a decorated PGA producer and burgeoning director. She has produced and directed projects ranging from the 2019 ABFF winner Little Apple – to branded content for Netflix, Nickelodeon, DreamWorks, FOX, BET, and DOVE. She shares a regional EMMY nomination for a PSA and is an alum of the Tribeca Film Festival for a former show with BRIC TV. She has also produced shows for the Food Network, TLC, and OWN. Most recently she was the Creative Producer and Director for two series on BET Digital and produced the NAACP Image Award Nominated PBS/American Masters docuseries Unladylike2020. Okema was a part of the inaugural class of Fellows for Minority in FILM’s 2021 Branded Lab for commercial and branded directors and is presently a Producing Advisor for the Black TV & Film Collective where she also serves on the Board of Trustees. This is Okema’s first series director and showrunner position!

BRIC
BRIC is a leading arts and media institution anchored in Downtown Brooklyn whose work spans contemporary visual and performing arts, media, and civic action. For over forty years, BRIC has shaped Brooklyn’s cultural and media landscape by presenting and incubating artists, creators, students, and media makers. As a creative catalyst for their community, BRIC ignites learning in people of all ages and centralizes diverse voices that take risks and drive culture forward. BRIC is building Brooklyn’s creative future. For additional information, visit www.bricartsmedia.org.

WHY
● With over 40 American late-night talk shows, Hollie makes approximately the 8th to be helmed
by a Black woman and in this present moment, she is the ONLY Gen-X Mom!
● The entire Creative Team is BLACK – EPs, Showrunner, Creator/Writer/ Host, Directors, Editor &
Music Supervisor
● Hella Late! is BRIC TV’s first late-night talk show!
● Joy is a large part of the resistance and Hollie’s brand of Blerd Woman Joy is infectiously
hilarious!