2nd Chance TV Shows and Production — an organization dedicated to lending a hand to those in need — has announced that Season One of the production company’s namesake talk show will be debuting on the FOX Network in Spring 2021. The talk show, produced by Founder Paul Nutall and Co-Founder Tiffany Nutall, is part of the organization’s larger mission of telling the stories of the underprivileged individuals deserving representation, with a mission to clear obstacles in the path toward health, success, and fulfillment. 2nd Chance Save Lives offers down-and-out individuals an opportunity for another shot at life while offering people in a position to help the chance to do so. The talk show will be hosted by the talent of Dawn Neufeld (former cast member on VH1’s Football Wives and host of The Broadcast) & Jackie Christie (who is a producer and actress, known for Basketball Wives of LA). The official airing dates will be announced in the coming months.

Each of the 12 episodes for Season One of 2nd Chance Saves Lives centers around a story from a roster of culturally diverse, deserving individuals who are facing some form of adversity in their lives, including those in need of organ transplants, stem cell therapy treatments, child and foster care services, disease prevention, prison reform, drug and rehab help, homelessness, serious legal troubles, disaster recovery, unemployment, and financial assistance, and so much more. To defeat the feeling of surrender and isolation, the show gives exposure and assists in building relationships between people who need help and individuals across the country who want to offer support, by sharing the stories of overcoming hardships and transforming their quality of life.

“2nd Chance Saves Lives is a testament to the kindness of humanity as we aim to give individuals, who would otherwise solely rely on government assistance, a leg up,” said 2nd Chance Saves Lives Founder, Paul Nutall. “We are helping people who have lost hope entirely, that believe they will never find the help they desperately need. Thank you to Fox Network for giving us the opportunity to literally change the course of their lives for the better.”

“Our mission with 2nd Chance Saves Lives is to help others be victorious. Our organization and production team has worked to remove obstacles from so many individuals who are just looking for a break and a chance at happiness,” said 2nd Chance Saves Lives Co-founder, Tiffany Nutall. “The greatest impact of this show is that we are able to help remove the obstacles in the way of that happiness. Times are tough and there are so many Americans out there looking to give their fellow man a helping hand — we’re giving them the ability to do so.”

The Personal Journeys That 2nd Chance Saves Lives Season One Empowers Include:

• Larry Griggs, as he deals with the financial pressure of opening his own medical business in a deprived low-income community.

• Entrepreneur Cici Mackey, as she overcomes her abusive and criminal past influenced by her parents, in order to give her daughter a better life.

• Suzanne Tolbert, seeks to overcome the memories of her deadly drug addiction and the consequences that it brought along in her life.

• Stephanie Beck, as she seeks to make sure a terrible wrong done to her happens to no one else.

• Jeffrey Mendoza, as he seeks to overcome his past life as a member of a gang and re-build his life in a way that positively serves his community while bettering his life.

• Britney Grant, as she seeks to start an inspirational business for the youth after overcoming a life-changing medical implication.

• Johenny Volquez, as she seeks to overcome her troubling childhood and end the cycle of instability for her daughter and family.

• Anna Nyakana, who is working to overcome a life dictated to her by her childhood circumstance and her status as a refugee, by writing books that will educate the youth.

• Kimberly Trapani, who seeks to overcome a history of traumatic loss and stability to become self-reliant.

• Alonzo Herran, seeking to make his break with his films in the film industry.

• Ca-Asia Allen, seeking a second chance after experiencing teen pregnancy and the tragic loss of the baby’s father at a very young age—and the financial difficulties that she continues to face today.

Those seeking to support the show and its guests may contribute online.

The 2nd Chance Saves Lives TV Shows and Production, founded by Paul and Tiffany Nutall, is an organization and production company focused on lending a helping hand to those in need.

We Empower Magazine got an exclusive interview with Paul and Tiffany Nutall.

Tammy: When you first began 2nd Chance Saves Lives, what impact did you intend to make?

Paul: I intended to unite the world and groups of people together to help one another through our show.

Tiffany: At the beginning of our journey when we were just filming our very first pilot episode. I really envisioned our show to set an example to not just the youth but to people of all ages to be inspired and moved with compassion by the show’s stories, so that they would be inspired to help the people they meet in their own lives.

Tammy: What was the process like getting the show distributed through Fox Network?

Paul and Tiffany: After we filmed our 2 nd pitch episode here in San Antonio, we got connected with an individual at KENS5 who knew someone at the FOX29 station. After meeting with the GM and regional director, they aired our concept episode on FOX29. Then the regional director of Sinclair Broadcasting station spoke to the CFO on our behalf which resulted in us being picked up to air our shows on the nationwide FOX network.

Tammy: What are you most excited about?

Paul: I am most excited about seeing how our faith and not giving up is finally paying off and coming to fruition after so much hard work and adversity. And now we are on our way to helping more people in need.

Tiffany: I am excited about the many lives we are going to save and the impact we are going to make in their lives through our show. I’ve always envisioned our company expanding around the world since the beginning of our journey. I wholeheartedly believed it was always going to happen, so seeing doors open more and more after these past couple of years and meeting families and seeing their glimmer of hope when coming on to our show is what excites me and continues to excite me each day.

Tammy: What do you hope the reaction is from those who tune in?

Paul: I am hoping that the people who tune in will be able to put themselves in the shoes of our show’s and to imagine that they are someone who is a family or friend so that they are moved to give them a 2nd Chance if they are in a position to do so.

Tiffany: Continuing on from what I have mentioned above, I hope that our viewers’ hearts are touched by these stories, inspired when they see our guests receiving their 2nd Chance, that they are then motivated in their own lives to give people who God places in their path a helping hand whether it be a task large or small.

Tammy: What has it been like to work with each other?

Paul: With us being both alphas, I first struggled accepting that she was good at producing and directing the show. But after I began to realize how strong the show was developing with her leading production, I learned to accept that this is an area that she is very strong and good in and that it would be wise to consider, accept her ideas, and let her work the way she likes to work. And my strong suit was being the main speaker of the organization publicly and in business.

Tiffany: To be honest, the beginning stages were tough just because we both have strong alpha personalities and there were many decisions that had to be made, so finding a middle ground was tough. But as we continued to move forward, learning through experiences, and learning from both of our mistakes we began to understand our roles in the company and have now reached a place in which we know when to (as we like to say) “stay in our lane.”

Tammy: Why do you think it’s vital for the audience to watch the show?

Paul and Tiffany: It’s vital for viewers to watch the show so that they can get a clear vision of what the show is about. And if they know anyone who is needing a 2nd Chance – family member, friend, associate, etc. – they can go to our website and submit their story for their 2nd Chance.

We Empower Magazine also got to chat with Anna Nyakana.

Tammy: What is your role with the show?

Anna: I had the incredible honor to be a featured guest on the first season of Second Chances!

Tammy: How did you get involved?

Anna: Paul and Tiffany believe in the value of my Niyah Zuri Movement – a mission to empower the youth through representation and positive affirmations through books and digital media – and my dedication to decolonizing curriculums so all children can learn of the legacies from which they hail.

When I received the call that I was chosen as a guest for Second Chances, I immediately recognized the weight of the opportunity; to share my mission of saving the youth “one adventure at a time” with the nation. 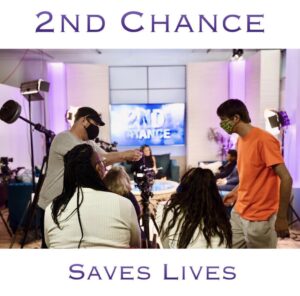 Matt Cedeño: Actor Of Our Generation

Bobby V To Be Highlighted This Sunday, May 2nd On TV One’s Award Winning Show Unsung