Mother and Author, April Fore. Overcome extreme loss, the test of faith and went on to pen the series, The Adventures of E.G.G to educate and bring awareness to Turner Syndrome, share her testimony and keep the memory of her daughter alive.

She has endured loss and turned that test of faith into a tremendous testimony. In 2014 at a routine 9-week prenatal screening April received devastating news. Her child had a cystic hygroma on its neck. This was an indicator that there were some chromosomal abnormalities.

After taking a karyotype test and waiting a very long two weeks it was determined that her daughter had Turner Syndrome. A few weeks later her daughter EmmaGrace went to heaven to be with the Lord. A class assignment planted a seed in April to write The Adventures of E. G. G. ( Emma Grace Godwins) series.

She found that writing the series was both cathartic and therapeutic when dealing with the loss of EmmaGrace. It wasn’t until her daughter was diagnosed with Turner Syndrome that she had even heard of the rare condition.

April knew she wanted to honor her daughter’s memory, bring awareness to Turner Syndrome, and empower the strong, resilient, and beautiful butterflies ( girls with TS are called butterflies) out there. The Adventures of E.G.G. showcases the beauty of being unique!

We Empower Magazine got an exclusive interview with April.

Tammy Reese: What vital information would you like for our readers to know about in regards to Turner Syndrome?

April Fore: Turner syndrome affects approximately 1 female in 2,000-2,500 live female births. It is estimated that more than 70,000 women and girls in the United States have Turner syndrome.

There are no known racial or ethnic factors that influence the frequency of the disorder. Turner Syndrome occurs randomly in fetuses at the time of conception.

An early diagnosis is essential to the health and development of girls affected by this disorder. TS indiscriminately affects babies regardless of parental age, ethnicity, race, or where they live. Turner is the second most common genetic disorder.

Tammy Reese: What feedback have you received so far from The Adventures of E. G. G. ( Emma Grace Godwins)?

April Fore: I have received nothing but positive feedback. Teachers and counselors really love the message the book sends about being different and how it makes being different cool.  African American parents have told me they enjoy that there are ethnic character names in the books.

Tammy Reese: What was the experience like during your writing process?

April Fore: I must say I have had a very pleasant experience writing both books.  I wrote the first book in two weeks I believe and it took about 5months from start to finish to have the book published.  I always start with the title first then write the story.

Tammy Reese: In what other ways do you keep EmmaGrace’s memory alive?

April Fore: I talk about her a lot with my daughter Tahlia.  My mother and I both wear an urn with EmmaGrace’s ashes in it.

Tammy Reese: Any other books in the works?

April Fore:  Yes, there are 3 more books that are on the way.  I will release a book every February for the foreseeable future.  February is Turner Syndrome Awareness month, which is the rare condition EmmaGrace had.

Tammy Reese: What other projects are you currently involved with?

April Fore: In conjunction with the books we are working on a plush doll to go along with the books. I’m so excited to get my hands on the doll!!!

Tammy Reese: What words of empowerment would you leave our readers to cope through the loss of a child?

April Fore: Allow yourself to feel every emotion you have and talk about it.  It’s’ nothing to be ashamed of and neither is the pain they may be experiencing.

Share your story with others if you are able to do so.  When we share our stories we are being a blessing to others. 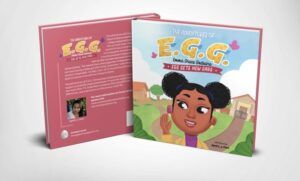