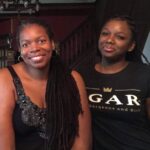 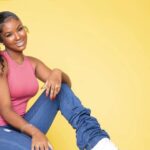 Never and Again focuses on a budding romance between Kevin (Long) and Jasmine (Boutte) first sparked during their teenage years. The duo equally supported and shared passion for each other’s dreams. Her love for music and his love for football, ultimately falling madly in love in the process. The Never and Again 11 song soundtrack lead single “Made For Me” by acclaimed Gospel Singer Tim Rogers features R&B singer Tweet.“It’s a great romance with a lot of faith” – Romeo Miller

We Empower Magazine got an exclusive interview with both the Director LazRael Lison & Soundtrack Producer Tracy Bell (Asah Entertainment).

Tammy Reese: How did the collaboration begin with you both together and with Master P?

LazRael Lison: Tracy and I grew up in the same town of Winchester Arkansas and we have a mutual first cousin, Antonio, who was very beneficial and onboard this project as well.

We all came together and that is how I got to know Tracy. We began working on projects together, two projects ago. We built a good relationship and been collaborating since.

Tracy Bell: We come from a small town and knew each other through the relationship we developed. We also had a purpose, intentions and have been consistent through the journey.

When Laz and I were discussing this film, we realized that Master P would be the perfect person to partner with. We didn’t have a connection to him at that time but we knew it was him we wanted to present the film to.

It was destiny through our Creator and Maker and the universe that brought us all together six months after talking about wanting Master P to be involved.

Tammy Reese: Tracy, you’re the Soundtrack Producer. Did Master P have any involvement in the soundtrack production? What was the process like?

Tracy Bell: Master P has had huge success selling over 100 million-plus units. When he and I sat down to talk about the music of the film, P had no questions and no input. He said let’s keep it like this, and let’s roll with it, so greenlighted everything.

As far as the music goes there were many major key players that are apart of the soundtrack. We have super-producers Blac Elvis and Chris Johnson to name a few. These guys worked on Grammy records with Beyonce and other great hip hop artists.

Tammy Reese: LazRael, as the Director, what was it like working with the cast?

LazRael Lison: It was an amazing experience and I had a great time. It was the first film that I worked with a majority African American cast.

I came in as a fan of a lot of these people. Such amazing people and actors such as Jackie Long, Denise Boutte, Vanessa Simmons, and Christain Keyes. Then we have Ella Joyce, she’s Black Royalty.

I had to get past being a fan. Working with them and watching the level of professionalism that they came with the film was just so good.

Out of all the films I’ve done I’m hooked from working on a film like this, especially with the message we are sending. As a father, I am very conscious about the types of films I want to do and the messages I want to present. I love how this film is connecting with the culture and building people up. We are driving the culture forward.

Tammy Reese: What sets “Never and Again” apart from other love stories or Romantic Comedies?

Tracy Bell: Laz has done 5 theatrical films including horror films, all of which are really great. He is new culture filmmaking, but we are apart of a movement. Our culture is being represented through this film.

We have a great team behind this project and legendary people involved. We kept a realistic and wide range of emotions throughout the movie. What sets this movie apart is also the message of a perfect love story.

Tammy Reese: Was it strategic to put the film out around Valentine’s day?

LazRael Lison: Valentine’s is love so I do think that was BET’s whole strategic plan, and we talked about how dope it would be if the film did come out around Valentine’s Day. We wanted this, and it all worked out.

The film is out now and it ties in with Valentine’s Day message. My whole goal was to do a movie about love, fighting for love, valuing a person, and forgiveness.

Of course, add a little drama into it, but overall the film is about building a person up and not tearing a person down.

Tammy Reese: What advice would you have for aspiring Black Creators who aspire to be a Filmmaker or a Soundtrack Producer?

Tracy Bell: We all got a glass ceiling over our head. That’s what inspires us to dream bigger and see better. It starts with you going out and downloading the “Never and Again” movie soundtrack and watching this film. If you need some inspiration, start with that (fun laughs).

I say to that young dreamer keep digging. A lot of things Laz and I spoke about came to pass. So keep dreaming because you can’t fix your past, but you can make sure that your future doesn’t get broken.

The future is right now, so you have to work with what you got now and trust God!

LazRael: Not only dream but act. No one ever becomes a great producer, director, or writer by not working at it. You have to constantly work at it.

The people that make it are those who are consistently being with it. Even if you do make mistakes and fail at times, that’s how you learn and grow. If you believe and want it, Put in the work!

Stream “Never and Again” which is now available on www.bet.plus.