Sylvia Anthony firmly believes that life is a gift from God, and she’s been using her gift to impact more than a thousand homeless women and children through her nonprofit, Sylvia’s Haven, which she launched in 1987. At 91 years young, Sylvia remains steadfastly involved with Sylvia’s Haven and hopes to inspire others to overcome life’s challenges and pursue their passions.

“When we do the right thing with the right motives, there is no limit to how far we can go with the help of God,” -Sylvia Anthony

This quote is what she writes in her poignant memoir, Till the End of Time.

“My advice to you is never giving up, whatever comes your way; it is all worth it.” -Sylvia Anthony

Sylvia had endured a difficult childhood that included an abusive father and a disinterested mother. Sylvia married young and remained in an abusive marriage until a divorce that left her alone to support her three children. Through her ambition and strength of character, Sylvia persevered, building a life for herself and her kids.

After raising her children, Sylvia remarried — still, there was a void. She felt a calling to help young women, and her husband, Rick, encouraged her to follow her heart. Initially designed for homeless pregnant women, her shelter opened on January 25, 1987. Sadly, her husband lost his battle with cancer on March 30 of the same year, telling Sylvia before he died to “go get the girls.” And she’s been giving new hope to young, homeless women ever since.

Hers has been a life woven with tragedy and triumph, but at Sylvia’s core burns a powerful source of courage and tenacity. She shares her remarkable story in Till the End of Time, which chronicles her early days as an unwanted child, born at the onset of the Great Depression; through her turbulent first marriage, which blessed her with three children; to finding love and discovering her divine purpose later in life.

The book includes a chapter with testimonials from women who have been helped by Sylvia’s Haven, underscoring the impact of her unwavering dedication to others. Till the End of Time is the ultimate love story, woven with heartwarming memories, inspirational anecdotes and life lessons that will inspire readers to share their own God-given gifts with others.

Author Sylvia Anthony was inducted into the National Women’s Hall of Fame on June 15, 2020. Invited to their museum in Seneca Falls, New York, she drove more than 350 miles for the appointment! Shortly thereafter, she received a Lifetime Achievement Award from Marquis Who’s Who.

A woman of faith, courage, tenacity, and love, Sylvia firmly believes that the “golden years” are a time to get busy. As the founder and president of Sylvia’s Haven, a shelter for women and children near Boston, she has helped transform over 1,100 lives in the past three decades. Sylvia refers to her organization as her “magnificent obsession.”

Life hasn’t always been easy for Sylvia, but she believes that God not only gives her courage during times of hardship but also keeps her healthy so that she may realize her dream to open up Sylvia’s Haven locations in all 50 states. 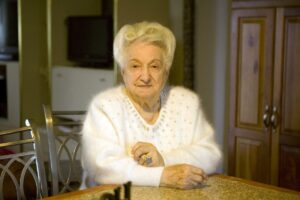 Tammy Reese: What inspired you to create your memoir?

Sylvia Anthony: The death of the love of my life inspired me to create my memoir. His death inspired me to look back at my life and it also made me realize that there was a lesson for all who read it.

Tammy Reese: What are a few memorable moments you mention in the memoir?

Sylvia Anthony: I witnessed death at a very early age. When I was 5 years old my favorite uncle who was 18 years old drowned. That moment was a big part of my life that I speak about in the book and how I dealt with it and how I felt from that moment and beyond.

Also, in the book, I talk about Sylvia’s Haven Shelter for Homeless Women and Children which has been running for over 34 years. To date, I have helped thousands of women and children and I am still going.

Lastly, I would share, to not give too much away of what is in the book. I share about the day I received a letter from the federal government informing me of an army base in North-Central Massachusetts that was being downsized by 48 percent. I was told that through the McKinney–Vento Homeless Assistance Act, x amount of space was to be set aside for the homeless. They told me that if I were interested to send in a letter of intent and proposal. They also sent me a listing of all the buildings that would be available. The cost for the lease was one dollar a year. I quickly jumped at the opportunity.

Within 30 days I was accepted but had to wait 3 years for the soldiers to vacate the premises. I became the second-largest shelter in the country. The number one was Bill Gates. One of my greatest experiences was seeing a woman graduate from a law school that was born in my shelter. Today she is working as a lawyer in a Boston Law Firm.

Tammy Reese: What was the experience like being inducted in the National Women’s Hall of Fame?

Sylvia Anthony: I was ecstatic! After I got the letter to congratulate me on the induction I received an invitation to visit the museum located in Seneca Falls, NY. I drove from where I live in Winchester Massachuttes to the museum.

It is over 350 miles one way. At that time which was last year, I was 90 years old. I drove alone to there and back.

The woman I was speaking to told me that she had two daughters. She then pointed at the little one and said her name is Sylvia too. I stooped down to the little girl and she quickly said “I’m years old”. I told the little girl that she will grow up to be a very beautiful and smart woman.

Then the mother asked would I take a picture with them, I agreed and little Sylvia came by my side and the husband took the picture. That made my day!

Tammy Reese: When you think of women empowerment, what comes to mind?

Sylvia Anthony: When you look at the history of how women in this country have been empowered you have to realize that women can do anything.

Nothing is impossible for those who take on any challenge and succeed.

The National Women’s Hall of Fame has it all recorded.

Tammy Reese: How has Sylvia‘s Haven made an impact on your life?

Sylvia Anthony: These have been some of the most rewarding years of my life with Sylvia’s Haven. It is what keeps me going. To see women come in for two years and after their two-year stay, you see them evolve and go make a life for themselves.

This is the most amazing thing you can imagine. I thank God that he has kept me in this profession for over 34 years. So that I could see how these women have been impacted. This is a gift from God.

Tammy Reese: What do you enjoy most about the work that you do?

Sylvia Anthony: Time to time the women get in touch with me years later and thank me and tell me how they evolved or how successful they are. Some look so great I can hardly recognize them.

One woman once came to Sylvia’s Haven who was very distraught. She looked as if she was in the bottom of the barrel. At that time she had become an alcholic. She was a professional painter and could play the piano very well, in fact she once gave me some lessons.

When she worked she worked in marketing. She had been married throughout college, her husband became a doctor and then left her. When she came to us she started attending AA meetings, upon her graduating she began painting again so we gave her a studio to work in.

She eventually connected with her Agent and started selling her painting work again. I actually have three of those paintings till this day. These are the joys I experience on a continuous bases.

Tammy Reese: What do you want your legacy to look like?

Sylvia Anthony:  I would like to have shelters in every state and that is what I am looking for now because that is the legacy I want to leave.