DON’T WASTE YOUR PRETTY premieres on Sunday, February 28, 2021 at 8 p.m./7C. Based on the eponymous book penned by award-winning author and media personality Demetria L. Lucas, the film tells the story of tightly knit friends as they sort out their turbulent life and love issues.

DON’T WASTE YOUR PRETTY is directed by Tamara Bass and written by Katrina O’Gilvie(“Behind the Movement”; nominee for NAACP Image Award for Outstanding Television Movie, Limited Series or Dramatic Special). 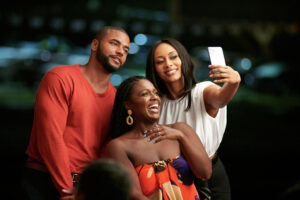 For more information about TV One’s upcoming programming, including original movies, visit the network’s companion website at www.tvone.tv. TV One viewers can also join the conversation by connecting via social media Twitter, Instagram, and Facebook (@tvonetv) using the hashtag #DONTWASTEYOURPRETTY.