LOS ANGELES – The Black Leadership AIDS Crisis Coalition (BLACC) powered by AIDS Healthcare Foundation, announced today the partnership with iN-Hale Entertainment and All Tea No, Shade Productions in support of the National Black HIV/AIDS Awareness Day on February 7, 2021 with the theme of “Stigma Gotta Go.” “Stigma and shame are 2 parallel social ills that continue to fester in communities of color all across this country and play a role in the increasing number of new HIV diagnosis among Black Americans” stated Imara Canady, Chair, Black Leadership AIDS Crisis Coalition (BLACC). “It is our hope that through sharing this powerful production that we continue the critical work that BLACC has been doing for close to a decade in breaking down the mis-conceptions, lack of awareness and ignorance around a myriad of issues that feed into stigma, and further divide us as a community. We truly build community by each of us showing up fully as who we are, and each of us respecting the diversity that exists within our community.” According to the Centers for Disease Controls (CDC), African Americans make up close to 14% of the U.S. population, but close to 50% of new HIV diagnosis.

The partnership presents the filmed dramatic reading and special virtual event on Monday, February 8 AT 5:00PM PST / 8:00PM EST of George Matthew Johnson’s Amazon Best-Book of the Year 2020 and critically-acclaimed novel, All Boys Aren’t Blue: A Memoir-Manifesto, recently optioned by Gabrielle Union and Sony TV for television. The short film, which is directed, adapted and produced by Nathan Hale Williams is a filmed dramatic reading of three chapters of the book performed by Jenifer Lewis (“Black-ish”), Dyllón Burnside (“Pose”), Bernard David Jones (“The Mayor”) and Thomas Hobson (“Sherman’s Showcase”). The three-part virtual event will feature live performances, a virtual art installation curated by African American contemporary art dealer/curator, Rodney LoveJones and music featuring Black artists. The evening will conclude with a roundtable discussion moderated by Tai Beauchamp with the goal of moving out the fear that creates stigma and replace it with love through the event while also having a sobering discussion that needs to be had.

For more information on the virtual event, please CLICK HERE .

All Boys Aren’t Blue: A Memoir-Manifesto is the bestselling and award-winning debut book by George Matthew Johnson – an award winning non-binary writer, author and activist living in New York City. Johnson’s memoir-manifesto, explores his childhood, adolescence, and college years in New Jersey and Virginia. From the memories of getting his teeth kicked out by bullies at age five, to flea marketing with his loving grandmother, “Nanny” (played by Lewis), to his first sexual relationships, this young-adult memoir weaves together the trials and triumphs faced by Black queer boys. Both a primer for teens eager to be allies as well as a reassuring testimony for young queer men of color, All Boys Aren’t Blue covers topics such as gender identity, toxic masculinity, brotherhood, family, structural marginalization, consent, and Black joy. Johnson’s emotionally frank style of writing appeals directly to young adults. The book was selected as one of 2020’s best by Kirkus, Amazon and Goodreads. Johnson identified as he/him when the book was written.

ABOUT BLACC / AHF The Black Leadership AIDS Crisis Coalition (BLACC) powered by AIDS Healthcare Foundation (“AHF”), is a coalition of Black-American cultural influencers and health advocates, that through the use of innovative, culturally relevant messaging and initiatives, are revolutionizing outreach to the Black American community and elevating the education and awareness of sexual health and wellness and bringing greater awareness to the social justice issues disproportionately impacting the health and wellness of Black Americans.

ABOUT iN-HALE ENTERTAINMENT iN-Hale Entertainment is a content creation and entertainment production company founded by Nathan Hale Williams. We develop and produce films, television, books and events. Our goal is to create content that encourages and inspires our audiences to believe in the possibility of living the life of their dreams. Our singular goal is to uplift audiences through entertainment. We produce television, film, books and events all with our mission at the forefront. We want you to inhale our entertainment and exhale life.

ABOUT ALL TEA, NO SHADE PRODUCTIONS All Tea, No Shade Productions is committed to redefining stories and creating art that tells often forgotten or overlooked narratives across all mediums through a radical Black feminist, trans including non-binary lens. ATNS strives to reconstitute a fragmented cultural past and correct the whitewashing of historical Black and queer narratives while introducing the world to events, icons, and narratives both present and future in their full truth and totality. Founded by NABJ award-winning writer and author George M. Johnson and Outfest award-winning producer, writer, and choreographer Twiggy Pucci Garçon, All Tea, No Shade Productions collaborates with writers, directors, producers, animators, journalists, actors and podcasters to breathe life into feature and short films, television shows, documentaries and multimedia projects that are centered in authenticity, integrity, and innovation. 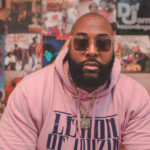 H2One Scoring Big with Celebrities and Athletes Across the Globe 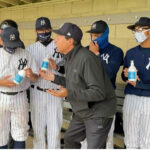