Born and raised in Boston, Massachusetts Antoinette Fernandez continues to make her mark in the film industry. Her first project “Still Got The Juice “ has earned her recognition and placements in some of the most unique Film Festivals worldwide. Her 2nd project “Out On A Limb” has been recently nominated for best screenplay in the Montreal Independent Film Festival and the Venice Shorts Film Festival. She is an Award Winner at Los Angeles Cinema Festivals Of Hollywood (Winter). Her 3rd project “Just By Chance“ placed as a Semi-Finalist in the Monthly Indie Shorts. Her unique storytelling and drive have captured the hearts of her followers and the interest of the film industry elites. Antoinette Fernandez is destined to change today’s narrative by creating fun, meaningful, and heartfelt stories for the culture. 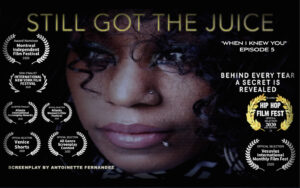 Tammy: What inspired you to become a Filmmaker?

5 years ago my sister died. I’ve never experienced losing anyone that close to me. I never believed she would actually die and when she did I felt like I died too. I was so consumed by her death that I began to look like death. Until I was introduced to a young man who also lost someone. One day he said to me “Toni you have a choice. You can stay depressed and eventually wither away from it,  or you can learn to live again”.  From then on I would encounter people who have had lost someone. Though what really made me get into filming stories was a guy who knew my sister.  He said to me “Toni you use to film music videos. You use to have the JUICE”. I said to myself wait I “Still Got The Juice”. From that moment “Still Got The Juice” was born. The episodes from the series are all about “Losing Yourself Only To Find Your Way Again”.

Tammy: What have been some of the proudest moments so far in your career?

My proudest moment was when “Still Got The Juice“ and  “When I Knew You” was published on Amazon by All Genre Film Festival. Our screenplay was an Official Selection. In memory of my sister, I put her on the poster. It’s definitely one of my proudest moments!

Tammy: Please tell me about some of your completed film projects?

“Still Got The Juice” is the first project which is a series whereas it will be ongoing.

“Out On A Limb“ is a short film about 4 college students who get caught up in a dangerous love triangle leaving 1 dead, 2 on the run, and one pleading for his life.

“Just By Chance” is another short film about a sports lover and his newly pregnant wife who do there best to survive their two-year marriage in the midst of a bitter battle between his favorite sports team, a deadly virus, and a lucrative position he holds at a successful CPA firm.  Just by chance, the unexpected happens.

Tammy: What feedback do you get from your work?

The feedback has been very positive. I look at critiques as a way of becoming better. I’m fortunate to have mentors that continue to guide me into being the best I can be. In 2020, two of my projects “Still Got The Juice” and “Out On A Limb” both been nominated for Best Screenplay at The Montreal Independent Film Festival. “Out On A Limb” was also nominated at the Venice Short Film Festival and an Award Winner at the Los Angeles Cinema Festival Of Hollywood. My 3rd project “Just By Chance” has been placed as a Semi-Finalist Monthly Indie Shorts Film Festival. 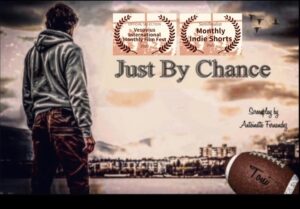 What was your experience like as a Filmmaker with the prestigious NYC Hip Hop Film Festival?

I would say it was definitely a learning experience. The festival not only taught me how to become a better writer by participating in their Act Up events but also taking classes on how to pitch your projects. Knowing what the industry is looking for from up and coming filmmakers have shown me what to look for when casting actors and how to be prepared so when you are approached to be invested in you are ready. I met some great people there. I am very thankful for the opportunity to have learned from C R Capers and so many others. It’s a very unique festival.

Why do you think it’s important for women of color to get into the film industry as directors?

We all have a unique story to tell and when you’re a woman and from different backgrounds the stories that can be told are limitless.

Tammy: What do you think is the future of the film industry?

Great question! It’s hard to say with covid 19. Though I do believe we will see more diversity in the film industry than we have had in the past.

Tammy: In your opinion what are some advantages of being an Independent Filmmaker?

The advantage for me being an independent filmmaker is being my own boss. However, I’m definitely open to major networks and collaborating with others.

Tammy: What are some challenges?

Let’s see… challenges ??? COVID lol. When the pandemic hit all my travels stopped. That really affected my inspiration to write and to film. I so used to being on the go and filming when I wanted. When it stopped I didn’t know how to function until I watched seminars online, took some classes, read some books, submitted to festivals, and became inspired again.

Tammy: How has the pandemic shaped your day-to-day life?

The pandemic forced me to face to face myself. It forced me to slow down and look at how fast I was moving. Retrace my steps and leave behind what was not meant for me to bring into the future. The pandemic allowed me to get to know myself again. For we sometimes lose ourselves when we are trying to please everyone else.

Tammy: What lessons of 2020 will you take into the New Year?

I learned a lot of lessons however, the one lesson I will take with me is being my own cheerleader when I accomplish goals. When you start to climb the ladder people who use to cheer for you are suddenly absent. So it’s important not to lose focus on who’s not cheering for you but to continue being consistent with content and your audience will come.

Tammy: What are you currently working on?

I am working on another project called “Acquired Love”.  It’s another series but for the grown and sexy!

Tammy: What else can we be on the lookout for from you?

A VISUAL –  a documentary/episode short called “The Word Is Out “. The introduction to Still Got The Juice.

Tammy: If you could have any actor in one of your films who would it be and why?

Viola Davis. She just embodies her roles and that is a gift. What I love about her is that she transitions her emotions so well in her scenes it’s just like WOW!

Tammy: What advice would you have for women who wish to become film directors?

Study your craft. Take as many classes as you can on writing, character development, acting, and directing if you can’t afford classes. Go to YouTube also because they have some great FREE videos on writing and filmmaking. Build up your book collection and read, and most of all the key to being successful is implementing what you are being taught. Once you feel you’re ready go ahead and submit to festivals and please don’t quit if you get rejected. Rejection will only make you better as a filmmaker.